It’s not everyday that you get to bear witness to realities or narratives that you’ve come across only at the movies. So naturally, when I was asked to refer to Manjhi - the Mountain Man, while getting my research in place before my next field visit, I was intrigued. This would be my first visit to i-Saksham fellow, Rohit Kumar’s study centre in Jamui’s Sonai village.

On our way to his centre, there appears to be just one well-layed road that cuts through the length of his village. Rohit later tells us, that as the appointed sachiv of his village, along with the Zonal Officer for that area, it was he who overlooked the construction of the road a couple of months ago. But again, projects such as laying the road or setting up a water tank in the village are rare. Rohit otherwise, relies on his tuition classes to keep him occupied and serve him with modest livelihood.


Born in Kolkata, Rohit along with his family moved back to their native village. It was when he was studying in class 8 at the local Government school, that a neighbour requested him to tutor his children. 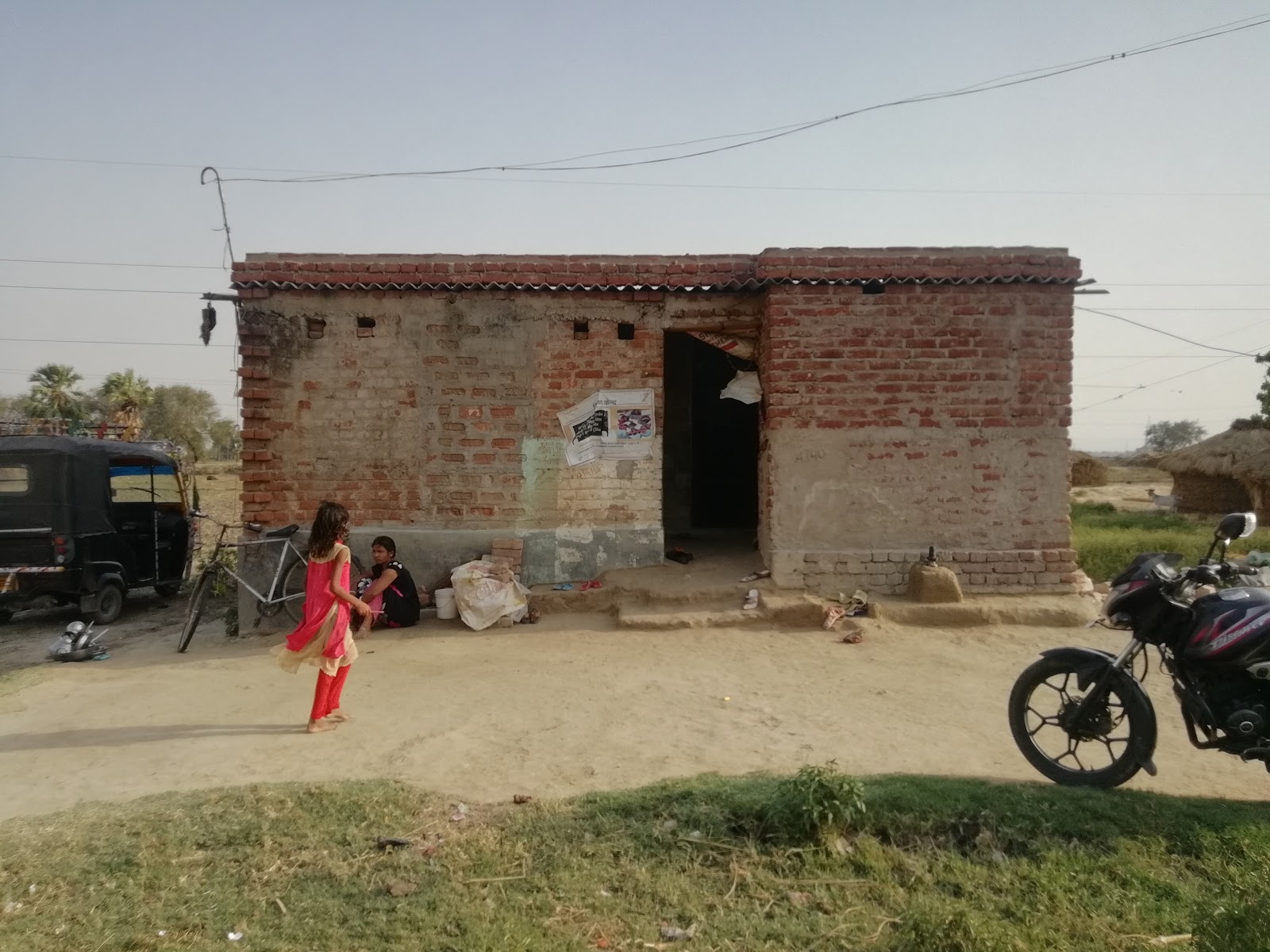 “I’d give tuition to children at their homes for an hour everyday. I started off with about 2 students, at a monthly fee of Rs. 50!” he recollects. As the number of children began to grow, owing mostly to word of mouth, Rohit started giving tuitions at his home itself. Today, he tutors children across four batches, starting at 5am and wrapping up his last batch at around 5 in the evening.

Taking up this vocation was never on his radar. Back in the day, he’d dream of making a career for himself in the performing arts - dancing and singing. He would end up performing for most of the small-time events around his locality, missing no opportunity to perform.

“But after I started teaching, I kept going at it since I started liking it,” he says. Rohit is the eldest of three siblings - a younger sister, who helps him with the teaching and a younger-todlersibling, who as we speak, walks into class and recites three English poems.

Rohit currently pursues his graduation in Geography from Bodh Gaya’s Magadh University. But this degree, he feels, is of little importance. As is the case with most of the educational institutions that I’ve come to know of recently, a standard graduate degree that other colleges would confer upon their students at the end of three years, is usually stretched across five years or more. Rohit now wants to sign up at Jamui’s K.K.M. College.

But the want to pursue an education stems from reasons, other than modelling what his friends are doing. Rohit’s village has dwellers from across castes and communities, thought most of them from what are traditionally known as the lower castes - including the Manjhi, Musahar
and Chamar communities. Most of the men here, with the women being homemakers, works in brick fields or as construction labourers. The others labour on fields not owned by them.

For children from such families, especially from the Manji
community, going to school isn’t a norm. It’s something you do out of the blue. However, the households in this community do earn reasonably enough to pay for their child’s education.


Where is the gap then?

“Children haven’t been to schools, since generations together. So the culture of going to school simply isn’t there,” says the boy who we struck a conversation with, while he awaited his turn to bathe at the borewell installed in the middle of the village. The boy in question, also from the Manjhi
community has been studying at Rohit’s centre for years now - with a gap of two years in between, since his father shifted base, in search of work. One of four siblings, Rohit tells me he funded most of his studies himself, from labour work he undertook earlier. He was one amongst the bunch of children from that community, that Rohit urged to study at his centre. “They wouldn’t study anywhere else. I pushed for their parents to send their children to me to study free of cost,” says Rohit. Things changed when two of them passed their class 10 exams - this encouraged others to join Rohit’s centre too. But some of them, in spite of all the efforts, fall out of the circle - succumbing to migration in search of low-paying livelihood.


The drive to get more and more children into his centre, especially those from disadvantaged communities is, from what I gather, one of the intangible impacts of Rohit’s association with i-Saksham.

A couple years into teaching, Rohit was paid a visit by the surveying trainers from the organization who offered a three month long training, at no cost and that right next door, in the same village. Since he was anyway tutoring kids by then, taking up the training, along close to ten other youth tutors in the locality, seemed to be a win-win situation for him. At the end of the training, he was the lone tutor in the programme - the others either got married and shifted base, or just lost interest.

After being absorbed into the two year long i-Saksham Fellowship program, one of the first questions he faced in one of the questionnaires had him baffled - how did he plan to single handedly teach a class of 50 students who belong to different classes and grades and who probably fell on varied points on the learning horizon? 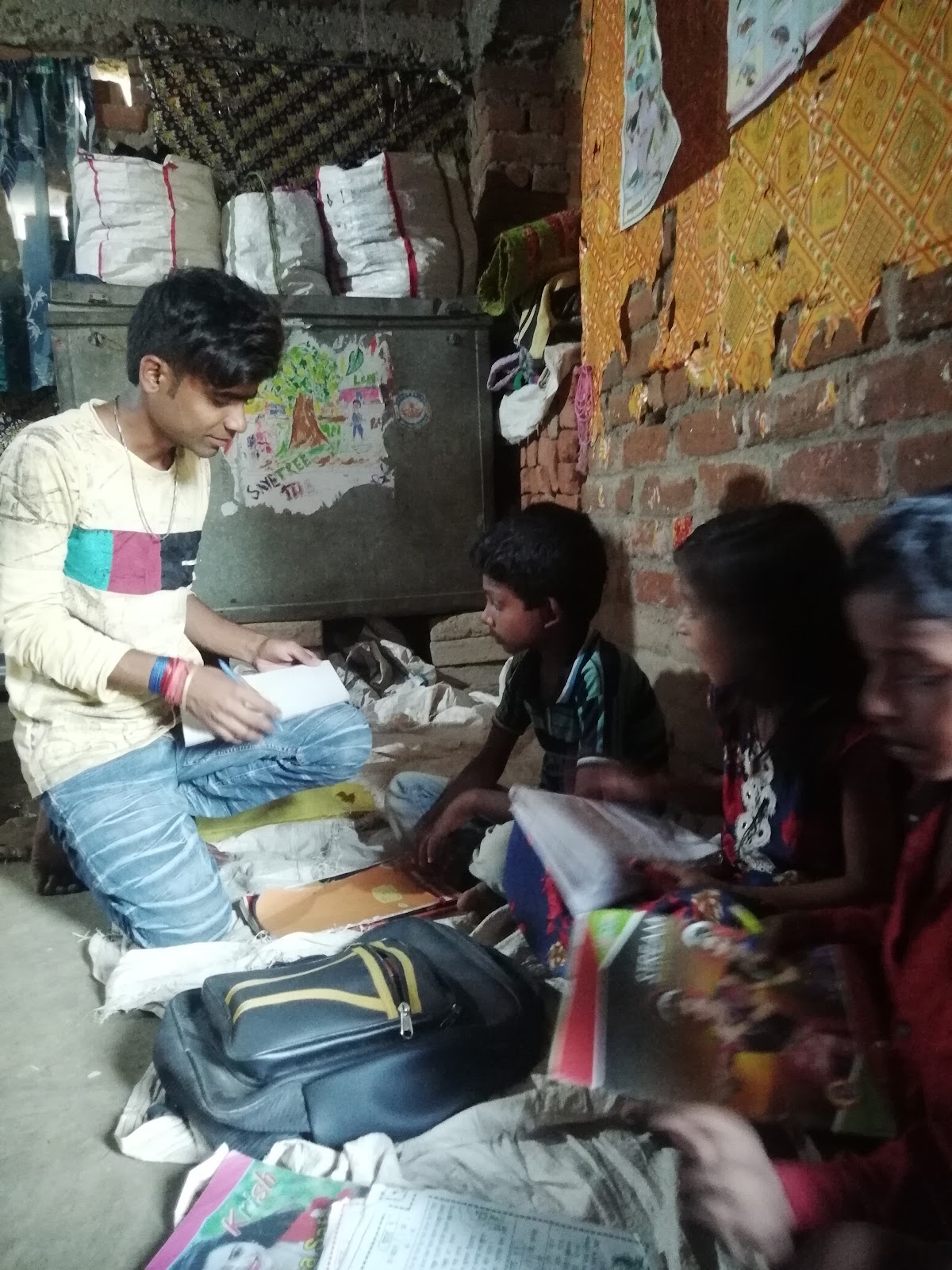 Along other interventions, i-Saksham has introduced a multi-level, multi-grade approach to teaching, that it extends to its fellows. Here, the multi-grade bit refers to the fact that the students are from various classes, from standard one to six, on an average. The attempt however, is to tailor the teaching not according to the grades, but according to the learning levels of the children. This acknowledges the fact, that though the child might study at a higher grade, his learning ability might still need some enriching, from the fundamentals and upwards. The process first begins with a baseline assessment tests - some outsourced, while others curated by i-Saksham itself - that are conducted every three months or so at the study centres of the fellows. This not only helps to identify where exactly the student stands on the learning spectrum and group children of a certain level together, but also helps in tracking the learning curve over a period of time.

“Earlier, I used to just teach them from their textbooks and push them to rote learn the subject. Now I understand them better and focus on explaining every details to the child,” says Rohit. Along with the teaching material provided for by the organisation, the network built amongst fellow tutors across villages proves potent. According to Rohit, visiting other study centres and interacting with other fellows and tutors, helps him discover newer methods and better models of teaching. 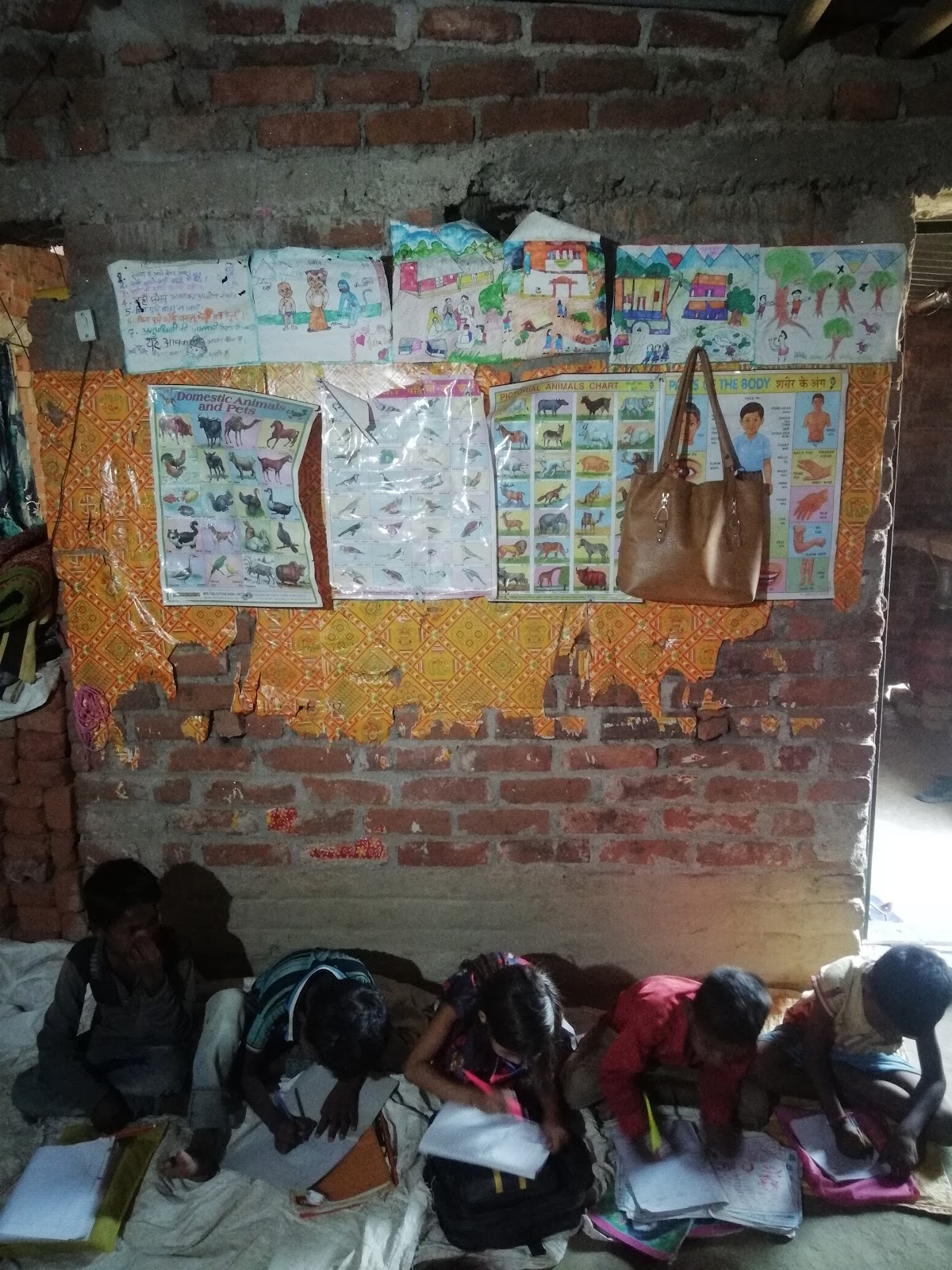 Rohit’s decision to pursue his own studies is an attempt to emancipate from the general living conditions around him. “I want to get a job in the private sector, a job in an office,” is the 21-year old’s description of what he want to do eventually. And helping him fine tune this somewhat vague aspiration, is his association with i-Saksham  - knowing well enough that without a proper degree, he’ll have to follow his father’s footsteps as far as choosing a vocation in concerned. In the remaining one year of the i-Saksham fellowship, he plans of utilising all of the resources in the knowledge pool available to further his training, increasing his qualifications and getting into institutes of higher learning. 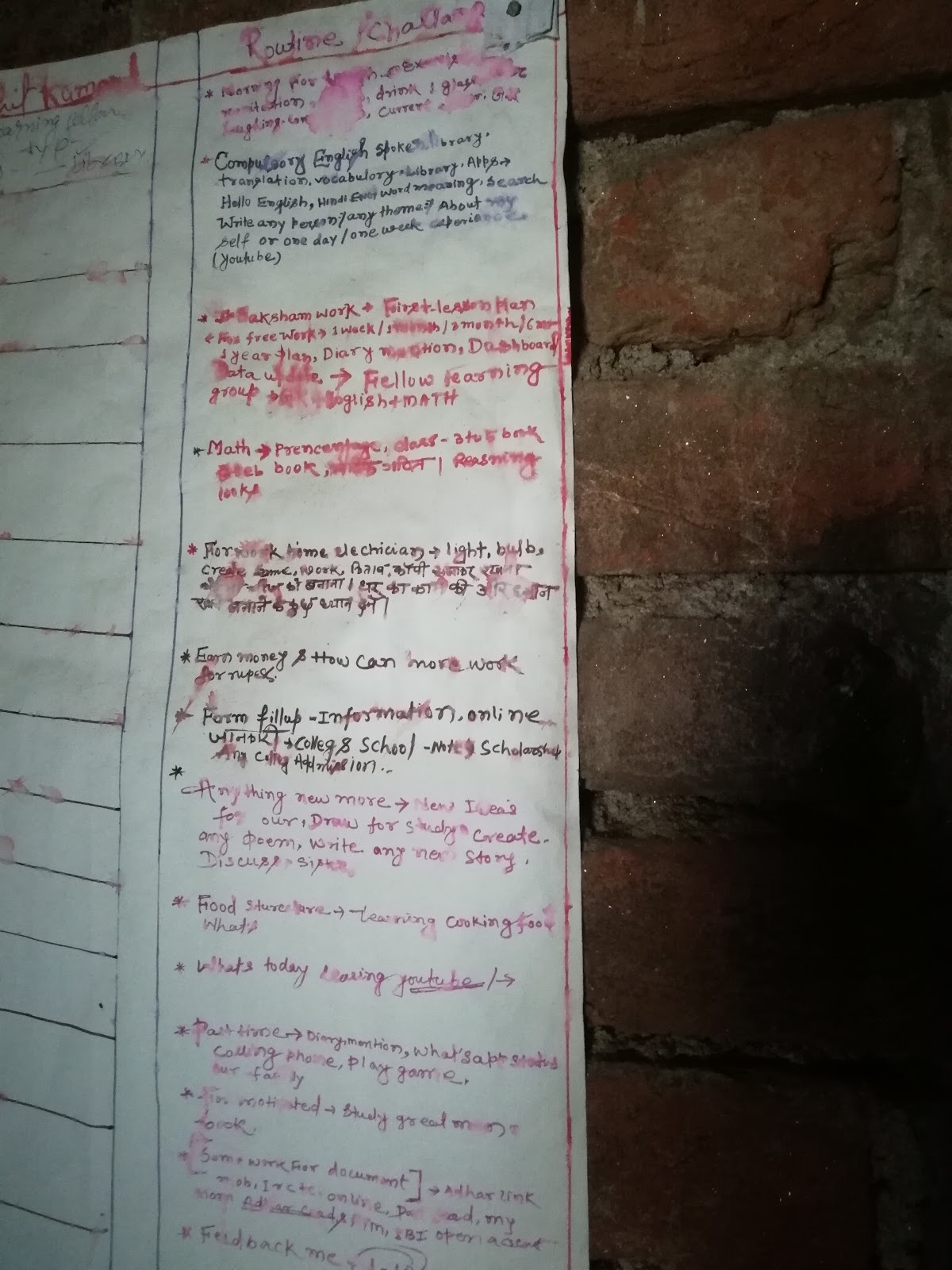 On my way out, I notice a white stretch of chart paper stuck on the raw-brick wall, right where a rat-pup had scurried over a minute ago. On it is a list of tasks, written down by Rohith using different coloured markers. These include ‘earn more money’, ‘get Aadhar card’, ‘learn maths percentage’ and ‘prepare (for) i-Saksham fellowship learning’ among others.

He quickly rushes to take a selfie with me. Soon after along with the snap just taken, he shows me other pictures in his phone gallery that he has edited himself. “Even when I’m pursuing higher education, I’ll look for ways to do these things,” he adds. “Singing, dancing, editing - all this can be done while studying too, right?”