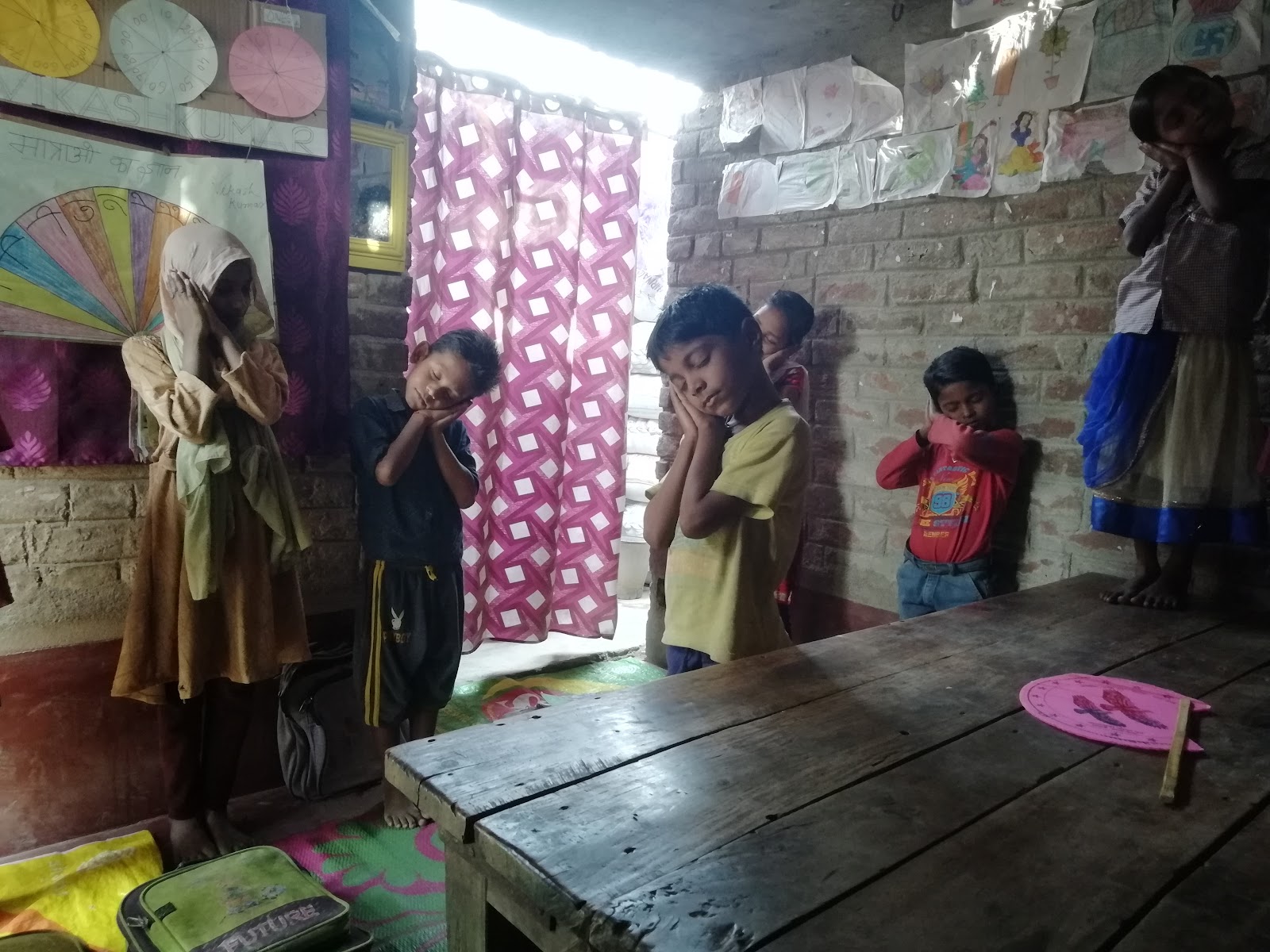 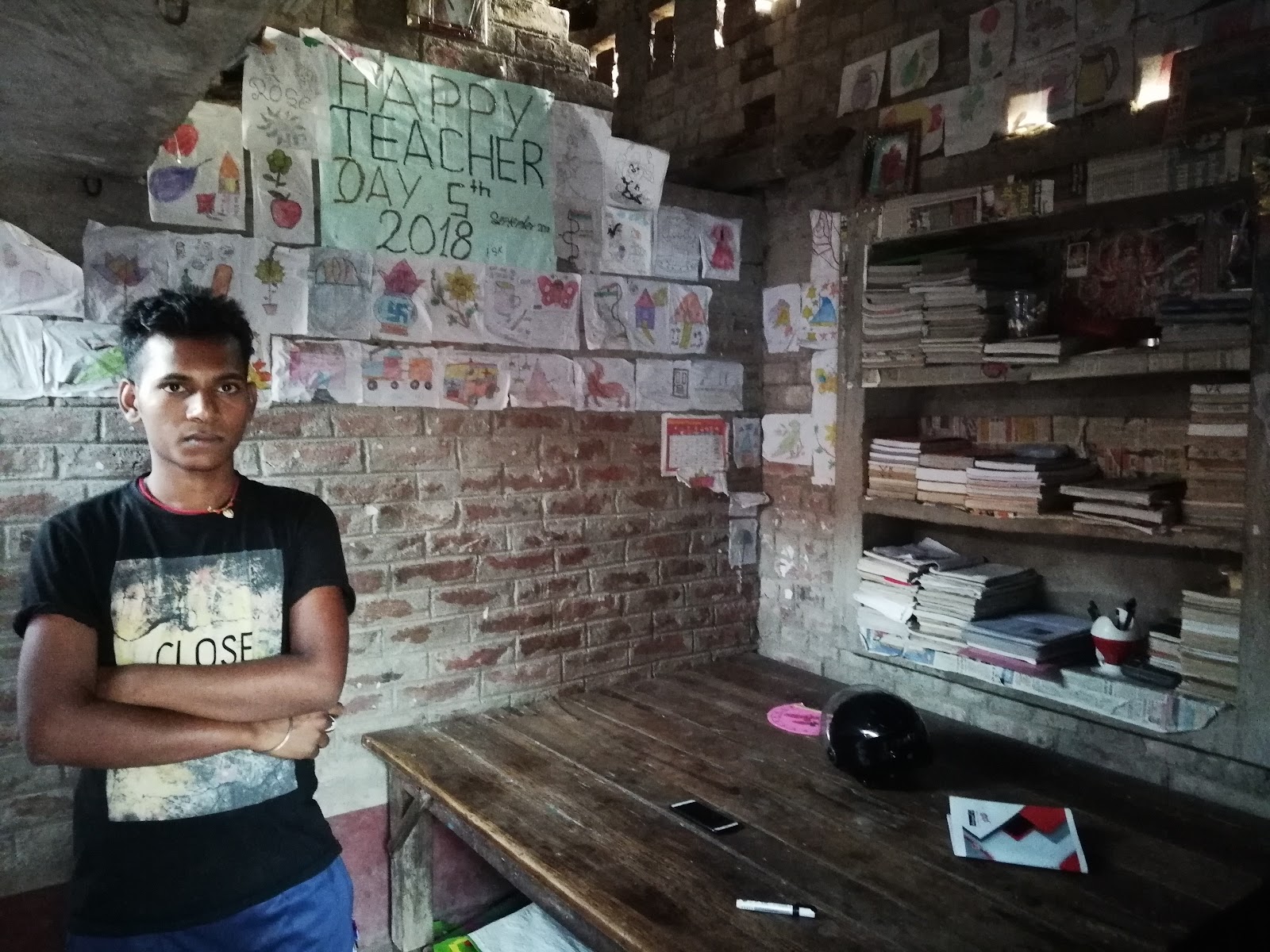 With around 40 children from the neighbourhood, Vikash would use more-or-less the same teaching method adopted by a standard tutor - teach from the textbooks of the students and stick to the content available, mostly relying on rote-learning. “I obviously taught them the same way I learnt when I was in school,” says Vikash who has recently appeared for his Class 12 examinations. Ask him more about how he used to teach kids earlier, and he doesn’t spin a very different story - raising his hands on the children, pushing them to learn things by heart and growing impatient at their inability to do so, among other motifs. 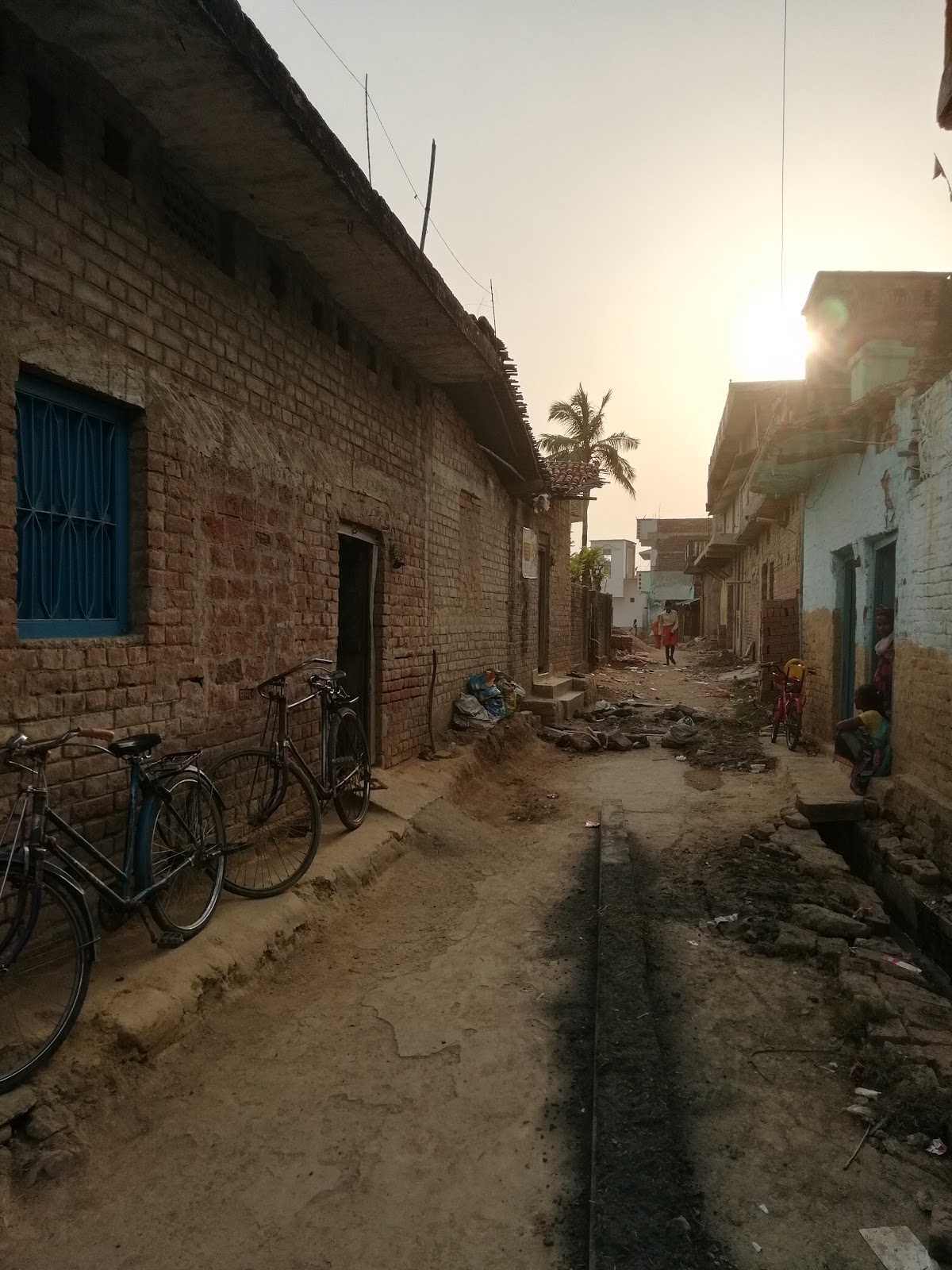 Abhishek’s parents themselves are uneducated. And this is something Gudiya Devi reiterates every now and then, in the course of our conversation. Her only parameters to judge her son’s studying patterns and the improvement therin, is others’ opinions. “His principal at school has good things to say about him. He gets the highest marks in his class too,” she says. A norm in the village, and possibly in other villages too, is to first send the child to the local government school. In case the child turns out to be a weak performer at the school, in spite of the preschool tuitions he or she is sent to like every other child in the neighbourhood, the teachers recommend for the parents to get their children into an English medium private school. This, in the hope that the child will learn better there. The private tuitions the children are sent to aren’t just to prep them in academics before they are admitted into schools, but also train them to sit in a classroom along with other children. Perhaps, this is also the beginning of the culture where in parents are involved in the education of their children only as much as to ensuring admission and paying for the classes, along with the buying of stationary for school. “We just ask them if they have done their homework or if they need anything. We spend our money too, so we want to study well, that’s all,” says Gudiya Rani. When asked if she is aware of what her children study, out comes her ever-reliable answer -“I’m not educated myself. How can I ask them about their studies?”

>Like all tutors involved in the i-Saksham fellowship, Vikash organises Parent-Teacher Meetings for the parents of all of his student, every three months. This practice, put to force by the organisation, stems from the well-founded fact that educating a child from a comparatively disadvantaged set-up may not just be about the child and the sources of education (as in, schools and tuitions). Once home, the child may again be exposed to reasons that hinder his or her access to getting a near-decent education. Even if that isn’t the case, the absence of aware family members or an unconducive environment may play spoilsport too. “Earlier, the parent turnout at the meetings was really low, barely 8 to 9 of them turned up,” says Vikash. Ever since, he started going to their homes and call them for the meeting personally. On the agenda at such meetings are everything - from the tutor’s own experience - with the children and at i-Saksham, introducing the parents with trainers or members from the organisation and most importantly, inform them about how they can get more involved in their children’s studies. The latter, is significantly seen as a ‘no man’s’ land for these parents, especially if they have never been to school themselves. An important consequence of such parent-teacher meetings is the change in that mindset. The parents now look into their children’s homework and ensure their completion along basic yet essential things such seeing to it that their children go to school well-groomed and tidy.

Perhaps, what comes as a boost to this mindset-shift is the change they see in their children. For example, Gudiya Rani tells me about how her children would barely remember what they learnt in class. “They’d study something today and forget it tomorrow; that doesn’t happen anymore” she says. 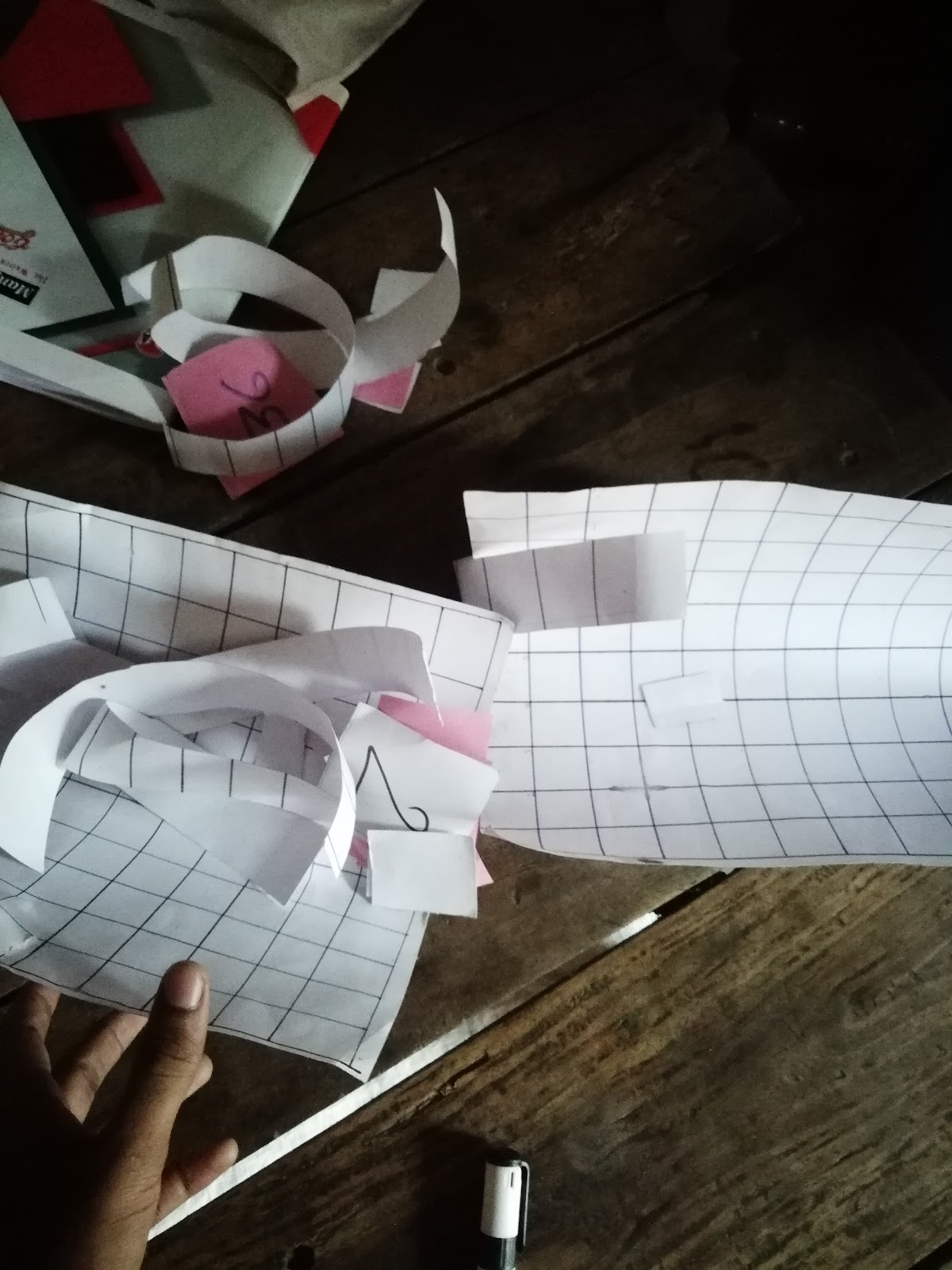 Every tutor, part of the i-Saksham fellowship and otherwise, who’s come in touch with the organisation, is encouraged to make use to TLMs - Teaching and Learning Materials.Some are provided by i-Saksham itself - for example the TLM on Fantastic Phonics. However, this is just to set into motion a cycle where provided TLMs push the tutor to get inspired and draw up unconventional teaching methods of their own. Vikash pulls out a TLM that he designed himself, to teach numbers. Math is clearly the winner among subjects, to prove itself the trickiest of the lot for its students and newer methods to learn the subject are always welcome. In his method, Vikash spreads across sheets of paper, each of different size. On each paper are drawn checks, the end result somewhat resembling a chessboard. Vikash then hands over a paper to a child, and asks him or her to tell him the number of checks on the paper. Other times it’s the reverse - he’ll ask them to pick the sheet which has a specific number of boxes - either 10 or 100, there’s a sheet for each! “It just helps them understand numbers better, other than just point at the number drawn in their textbooks,” he explains. But isn’t all this a lot more work for him? Teaching a kid strictly from his textbooks, relying on rote learning on the kid’s part is so much easier. When one chooses to make learning interactive and more effective, it’s taking an entire bunch of added tasks. “What work? It’s my responsibility to shape the children, making money isn’t the goal here,” says Vikash. The answer more or less seems rehearsed. But this is what I learnt at i-Saksham, he says.

His association with i-Saksham hasn’t brought changes to his teaching pedagogy alone. His personality too, has undergone massive changes. For example, sitting in a room full of people, talking to a stranger were things he couldn’t bring himself to do easily earlier. He now aims at pursuing a graduate degree in Hindi (honours).This comes as a surprise, especially when about a year ago, his ultimate goal was to get himself a government job after his class 12 examinations.

As we sit talking, another of his students Lovely Kumari walks in, eager to show me her painting on the wall of fame. Her mother, Hema Devi sitting besides, joins in the conversation. “Vikash is known to everyone in the locality. So when he offered to take tuitions, naturally people trusted him and sent their children to his centre,” she says. Like Gudiya Devi, Hema too trusts her daughter is in good hands. Her parameter, as well as Vikash’s for that matter, to judge the child’s progress is her choice of evening -time games. “I’ve heard the children sing the songs and poems learnt at the centre, even at home or while playing outside!” she laughs. 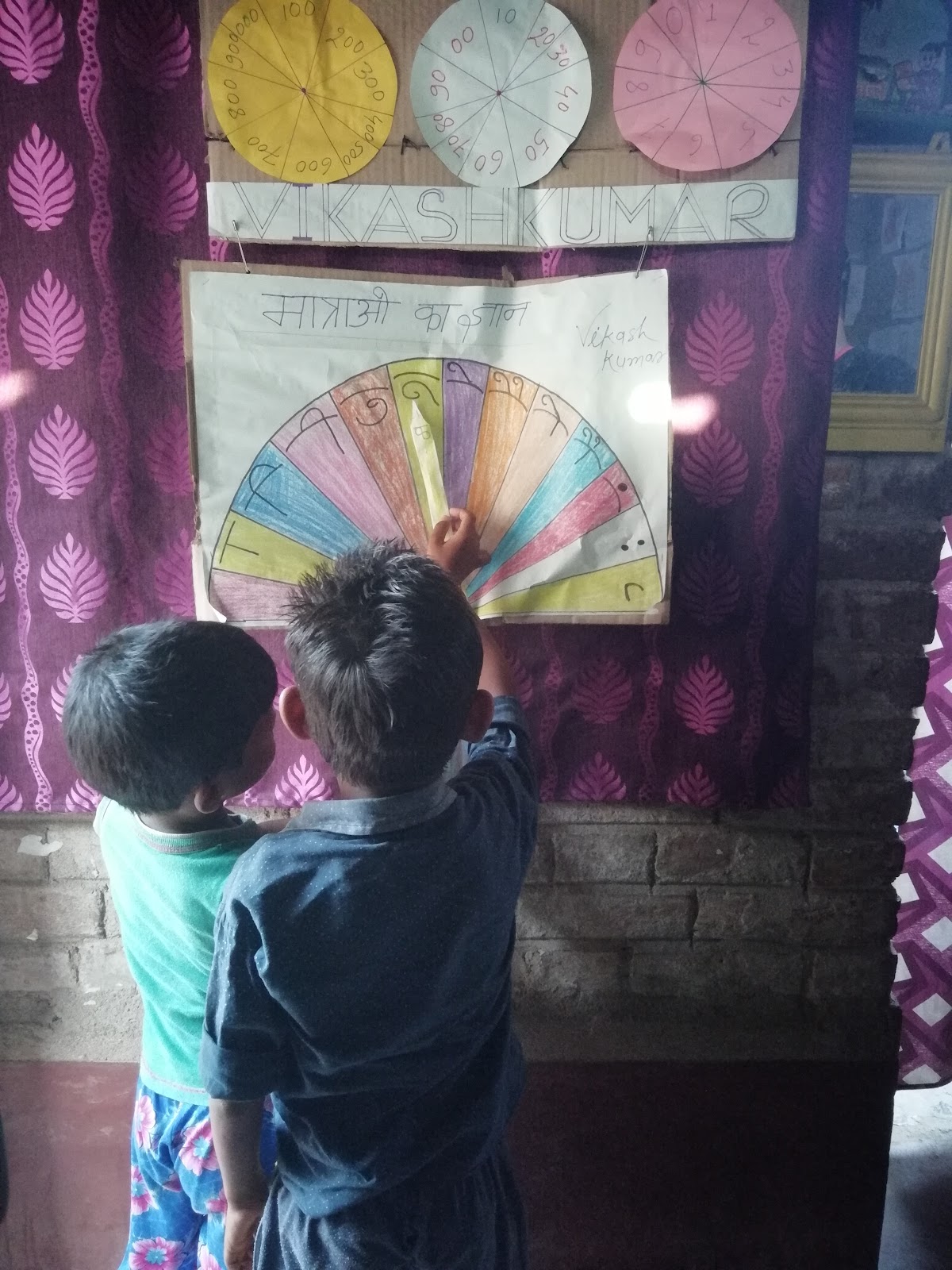