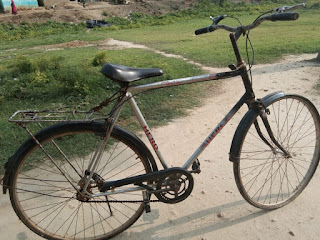 Good Morning Friend
Today I am going to tell you about my bicycle. This is my bicycle, I bought it in 2016 in 800 rupees.  This is from Hero compony. It runs very fast, it is not very heavy, it is a bit taller, its tire and many parts are a bit thinner than others. I bought it when I used to go home and teach. I saw this bicycle in a student's house for the first time, nobody used to drive it, it was lying in a corner. This bicycle was great to see. And I had seen him many times before in his village walking the child's father. It used to run very fast! His father-in-law gave them this bicycle in Tilak too. But since he came out to work, his bicycle was not manipulated. I used to think that I would like to ask my parents to sell this cycle. But we could not ask that we would understand anything else. I too had to buy a bicycle at that time. Because there was difficulty in going to the market, bringing ration, and other things.All my friends had bicycles, everyone used to run in the evening. I had already learned to ride a bicycle very well. My friends used to ask us when I am buying a bicycle. I used to say that I am going to buy a good bicycle very soon.
One day I was teaching children in his house. The child's mother said that I want to sell this bicycle, I asked why they said that no one runs it anymore, so it remains idle like this. Then he said that I had been thinking for a long time that I would sell this bicycle and deposit my fee. He had not deposited fee for a few months. She said if anyone wants to buy it, let us know. I smiled and said that you first talk to the father of Piyush then tell us, I have become very important to take a bicycle too. They said that I am not saying this to you. Piyush's father called us and said that if someone wants to buy a bicycle, then sell it.
I was very happy in my mind. I asked him the price of the bicycle, he said, what more price should I ask you, the fee it will be charged. I also did not say much because Fee was not much left, it was only about 700-800 rupees. They said, you take it with you, it will spoil some parts, get it made. I thanked them and brought the bicycle back home. I was coming back thinking that my mother would be very happy to see this but when I came home, she was a little angry with me that why did I pick up the bad bicycle and came back? Then I explained to them that I got it cheaply. And there is nothing wrong with it. When I get it made, it will be completely new. Now she had agreed.
The next day I went to get it made, I changed his tire tube and many other parts and got the greasing done too. 600 - 700 rupees was almost spent. Now it had become like new.
I came home running it with fun. Many friends of mine also ran it that day. Now it was not difficult for me to go far and fetch anything. Travel from college to market with this bicycle. It helped me a lot Thank a lot my bicycle ............. Today is Vishwakarma Puja, today I am going to worship this cycle along with other things!
Posted by Aditya Tyagi at 7:46 PM