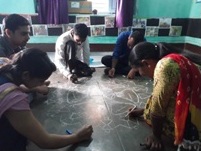 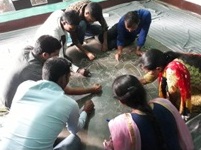 While waiting for everyone, Rajaram Sir and Tanuj Sir drew a pattern on the floor with chalk. Soon everyone joined and we had a beautiful work of art right in the center of the room.

The session started with questions from in-shorts, which had been made by Shivdani Sir. It was decided that the questions for next week will be made by Mamta.

After this everyone sat in meditation, and Tanuj sir played a very nice song (according to Pragya and Mamta)

Everyone talked about how their week had been.

Debriefing was followed by an activity conducted by Pragya. Everyone was divided into three groups randomly, each group included a tutor. The tutors played their own roles while the others played the role of parents. Everyone picked up a chit and performed a situation. We did two rounds of the activity, which were followed by a discussion. In the discussion, everyone commented on what they liked about each case and what more could have been included.

Discussion – A number of people commented that they liked the way Shivdani sir asked parents to give him more time (three months) in the duration of which the child will be able to improve. People commented that the ASER test could have been explained better and as Mamta didi said, he could have explained to them using an example, giving proof. He could have emphasized that the class is not important but the level. Shivdani sir could have also said that there are a lot of subjects that are taught and there are other things besides written work. Thus, the ability to write an application is not a sufficient indicator of assessment.
Mamta didi said that this situation happened with her once when a parent complained about the progress in math.

Situation -The parents complained to the tutor about the state of the government school and the tutor told them what all they can do in that regard.

Discussion – Mamta didi asked the parents how they knew that the school wasn’t working properly, she did not believe them just like that. She also asked them to go to the school and suggest changes rather than complain which was remarkable.
She did not talk about the rights that parents have vis a vis the school. In some instances, she suggested alternatives to the problems with the school. For instance, when the parent complained that the computers sit idle in the school, she suggested that they could use smart phones.  She also said that she herself cannot do anything.  Mamta didi said that this happens with her in the case of a particular parent. This was followed by a session on School Management Committee (SMC) by Amar Sir.

Situation -The tutor tried to convince the parents to pay attention to their kids’ studies at home while the parents argued that they cannot.

Discussion – Everyone appreciated Rajaram Sir’s act. He listened patiently to the parents and asked them about their background. He used convincing arguments and even explained using a notebook. He said that if they don’t have time they could ask the children in the morning or while making food. He said that if they could give time to their child before he started going to school, they could do it now as well. Shivdani Sir raised a very important question, of how to engage parents who are illiterate. Pragya said that they would definitely do a session on that. This situation happens all the time with every tutor.

Situation -The tutor discusses the timely payment of fees with parents

Discussion – Mamta didi explained very patiently. The parents tried to divert the topic by complaining about the studies, which she handled very well by saying that they are free to come and complain to her anytime they want, and shouldn’t just come when called. The parents would give excuses but she would find ways to stick to the point. For example, when the parents said that they stay in Delhi and cannot give their number, she asked them to give the number of some other relative who stays in the village. As for the parents, it was remarkable that they brought the point of how the child feels on the non-payment of fees. However, she agreed that the parents could give the fees for two months together at a later date which everyone felt would become a problem if every parent would do the same. While this situation had never occurred with Mamta didi, this keeps happening with Shivdani sir and Rajaram sir. Bablu sir also mentioned his observations from Smriti’s center about a particular case in which the parent did not pay the fees for five months and then the accumulated amount became too huge and they had to drop out. Everyone discussed what happens in real life.

Situation - The tutor tries to convince the family to continue the studies of their daughter and not get her married.
Discussion - Rajaram sir used many arguments to convince the parents. He brought in the legal aspect. The dowry angle was also brought in. He said that instead of investing five lakhs on the dowry, they should invest it on her education. He willingly took the responsibility of the education of the girl. Bablu sir suggested that he could have also talked about the impact of early marriage on her health. This was a situation which hadn’t happened with any tutor so far, but is a common occurrence. Everyone discussed child marriage briefly and Mamta didi told everyone about a recent case. Rajaram Sir said that next time he will actually make an effort to intervene.

Situation - The tutor invites the parents for a PTM, convincing them to come.

Discussion- Shivdani sir did not know much about what takes place in a PTM and the parents also agreed quite quickly. Shivdani sir could have mentioned more about what happens in the PTM, besides telling the progress of the child. No one has ever held a PTM at the tuition center. What all could be done in a PTM was discussed briefly.

Session on SMCs by Amar Sir
While the second case was being discussed, Amar sir took his session on the role of parents in the SMCs as it was directly linked to it. He explained on the board the hierarchy in school education system. He explained who come in the SMC (adhyaksh, sachiv and five members), who are eligible (parents, with a preference given to mothers), how the election takes place (election of the seven by the parent body and out of the seven the election of adhyaksh and savhiv by the seven), how the SMC gets dissolved(after a duration of 2.5 years or if the parent body is dissatisfied with the it) and what are the powers of the SMC(checking accounts, supervision, intervening and suspension of teachers and even locking up the school).
Tanuj Sir gave examples of the situation of the SMC from his own village and how people from the lower caste who wouldn’t say much or people who are associated with the principal are made the SMC members and no one gets to know when the elections take place.
Amar sir also explained a way to check online the attendance for mid-day meal in any school across Bihar. Here is the link – http://www.dopahar.org/dopahar/index.php?tag=6

Recap
Everyone said one thing which they liked about the session -